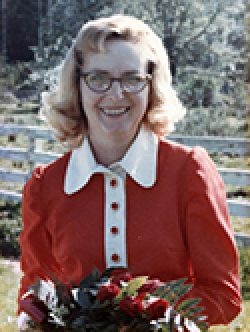 Gritta came to the United States from Germany. She eventually married Ceaser (Joe) Somatis and settled in California. Some years later, she came to Sweet Home.

Gritta volunteered at the Sweet Home Library and was a homemaker.

She enjoyed reading, knitting, cooking, and engaging conversations on market and political topics.

Gritta is survived by her son, Rainier Mario Somatis, of Sweet Home and four grandchildren.

She was preceded in death by her husband, Ceaser (Joe) Samuel Somatis, in 1973; daughter Gritta (Pippi) Christine Somatis in 1975; and son Aris Damian Somatis in 2015.