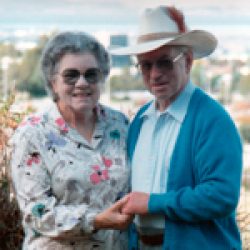 Grace Edna Miller, 88, a resident of Mennonite Village in Albany (formerly of Hayward, California) passed away gently in her sleep Thursday morning.

Grace attended school in Rockford, Illinois. When her family moved from Rockford to a farm in Roscoe, Illinois, Grace did much of the cooking, baking, and housekeeping for the family. She married Gordon Andrew Miller, the love of her life, in 1942. Gordon enlisted in the U.S. Army Air Forces during WWII as an airplane mechanic and served at Rosencrans Army Air Field in St. Joseph, Missouri. Grace and Gordon’s only child, Grace Gaynell Miller, was born in 1943.

After the war, Grace, Gordon, and Gaynell moved to Hayward, California where Gordon found steady work with the local carpenters union. It wasn’t long before they purchased a beautiful piece of land in the Hayward Highlands and built a small, one-story home. They later added a second story and garage. Several of Grace and Gordon’s siblings followed their example and built homes nearby. Grace enjoyed many happy years as a homemaker, and Gordon’s work developed into a successful career as a master carpenter and job foreman. Grace and Gordon joined the Church of Jesus Christ of Latter-day Saints in 1968.

Their daughter, Gaynell, married in 1962 and had a son, Jules Moritz, in 1963. Gaynell later divorced when Jules was ten years old. “Grandma Grace” kept a date with her grandson every Wednesday afternoon, which resulted in a special bond between the two and countless stories of their adventures. Gaynell was diagnosed with breast cancer in 1974. Grace and Gordon drove their motorhome to Gaynell’s home in Oregon several times a year to be with their daughter and grandson until Gaynell passed away in 1985.

Gordon retired from the carpenters union in 1986 after serving as superintendent for many years. He was diagnosed with Parkinson’s disease in the early 1990s, but was well for Grace and Gordon’s 50th wedding anniversary and surprise party in 1992. Grace cared for Gordon in their home for as long as she could, and then sat with him every day, from dawn to dusk, in a nearby nursing home until he died in 1995.

Following Gordon’s passing, Grace’s grandson, Jules, increased his visits with her. Grace was elated when he married Whitney Olsen in 2004. She had waited so long for a granddaughter! In April of 2009, Grace moved to Mennonite Village to be closer to Jules and Whitney and the extra support they could provide.

Grace enjoyed being a homemaker and lived her life joyously. Many holidays were spent around Grace’s table. She was an accomplished seamstress and made all of the clothes for her family from scratch. Grace is known for her loving heart, her “golden” cookies, and her teddy bear collection, and also for the letters she wrote so faithfully to her family members. Her spirit remains strong in our hearts.