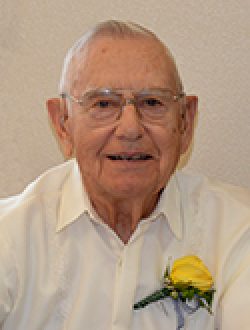 Viewing will be from 4:00–6:00 p.m., Thursday, September 22, at Sweet Home Funeral Chapel. Funeral service will be at 11:00 a.m., Friday, September 23, at Fir Lawn Lutheran Church. Private burial with Military Honors will be at Gilliland Cemetery.

Memorial contributions can be made in Gale’s name to O.E.S. Cancer research or Shriners Children’s Hospital.

Gale Ray Wilson, 88, of Sweet Home, Oregon passed away Sunday. He was born on a farm near Montrose, Jewell County, Kansas to Ray J. and Mildred M. (McCurdy) Wilson.

At an early age, he moved with his family to Burr Oak, Kansas where he spent his childhood and attended school. He grew up during the Great Depression, the Dust Bowl days of Kansas, and was a member of the Greatest Generation. Gale graduated from Burr Oak High School in 1945.

Gale was very active in sports and other school activities. He served as president of his freshman and senior classes. He was active in school plays and clubs.

In sports, he earned school letters four years in both football and track and three years in basketball. Gale had many ribbons for track and participated in the State of Kansas track meet his junior and senior years. He felt extremely honored that his fellow team members voted him captain of both the football and the basketball teams his senior year. Gale was also honored to be selected to receive The Citizenship Award given each year to the outstanding senior boy and girl by the vote of the faculty.

Gale’s father passed away when he was 14. Gale continued to work on the farm, planting and harvesting the crops with a four-horse team until his mother sold the farm in the fall of 1944. At that time, 60 percent of the farmers in that area were using horses.

After graduation from Burr Oak High School in 1945, Gale went with a harvest crew for the summer. They harvested wheat from Oklahoma north to Minot, North Dakota.

He then entered the armed service of his country and served with the medical detachment of the Twentieth Infantry, Sixth Division as sick and wounded clerk, with the rank of Technician 5th Grade in Korea with the Army of Occupation at the end of World War II.

After being honorably discharged at Camp Beal, California, he lived for a time in Boise, Idaho where he was employed by Eddie’s Bakery in the shipping department.

In July of 1947, Gale moved to Sweet Home, Oregon where he was employed at Willamette National Lumber Company, later to become Willamette Industries. He worked as a pipe fitter, mill wright, and electrician for many more years until an on-the-job injury forced his retirement after more than 43 years.

On September 12, 1949, Gale was united in marriage to Marjorie L. Freeby of Mankato, Kansas in the First Christian Church of Boise, Idaho.

They returned to Sweet Home and started their lives together. To this union were born three children; Michael Ray, Brenda Lou, and Kelly Gale. Gale and Marjorie had a long and happy life together, enjoying many, many things as a loving family.

He served as a school board member and as a committeeman for Liberty School District near Sweet Home.

Gale had the Allstate Insurance Agency in Sweet Home in the late 1950s and 1960s and cherished the many friends he made. He is a member of The United Methodist Church in Sweet Home.

He enjoyed many things in life. He liked his work, hunting and sports, traveling and attending fraternal meetings, especially the International Order for he Rainbow for Girls for which his wife, Marjorie, was the adult leader in Oregon for 20 years as the Supreme Inspector. Later, she served as Supreme Worthy Advisor for the world, The Order for the Rainbow for Girls. State Rainbow Dad in 2003-04. He was given the Grand Master’s Award in San Paulo, Brazil. He enjoyed being a special guest of the Bolivian Navy with a special tour of Lake Titacaca when the Rainbow Assemblies were organized in Bolivia in 2000. He enjoyed visiting Rainbow Assemblies in Australia, Brazil, Bolivia, The Philippines, and Aruba. He made many Masonic friends.

Gale loved and enjoyed his family. His granddaughters and his great grandchildren were his pride and joy.

He is survived by his devoted and loving wife of 67 years, Marjorie, of Sweet Home; son Michael and his wife Cheri of Gothenburg, Nebraska; daughter Brenda and her husband Larry Hyland of Dallas; son Kelly of Kameula, Hawaii; granddaughters Kimberly and her husband Shane Emmert of Silverton and Nicole of Seattle, Washington; great grandchildren Caden Emmert and Jorie Emmert of Silverton; and nieces, nephews, and many friends.

He was preceded in death by his parents; brother Wayne Wilson; and sisters Pauline Behee Cockran and Betty Satterfield.

Viewing will be from 4:00–6:00 p.m., Thursday, September 22, at Sweet Home Funeral Chapel. Funeral service will be at 11:00 a.m., Friday, September 23, at Fir Lawn Lutheran Church. Private burial with Military Honors will be at Gilliland Cemetery.

Memorial contributions can be made in Gale’s name to O.E.S. Cancer research or Shriners Children’s Hospital.