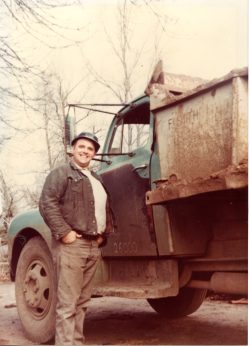 Open House Memorial for family and friends will be 1 – 5 pm Saturday November 26th at Fred and Edi’s “cabin in the woods”. 500 Locust Street, Brownsville.

Memorial contributions can be made in his name to Albany’s Samaritan Evergreen Hospice House.

Fred Vernon Smith, 86, of Brownsville passed away peacefully on Wednesday. He was born in Crawfordsville to Wayne E. “Marble Eye” and Velma (Koker) Smith. Fred was the grandson of John Elliot and Ella Mae (Newton) Smith, and great grandson of Frank Smith an original pioneer of the Willamette Valley.

After graduating from Sweet Home High School in 1949 Fred married his long time sweetheart and love of his life Edi Stanton. They were married in Crawfordsville and remained there for the birth of their eight children. Their wish for a big family had come true.

After years of driving dump truck for Linn County and Morse Brothers of Harrisburg, and a move to Brownsville, he went into business with his sons and formed Smith and Sons Sand and Gravel which later became Brownsville Sand and Gravel. Fred loved operating heavy equipment and running his family business in our local community. It was a labor of love for him until retiring to spend time with family and his many grandchildren.

Fred was active in local government and served on the Central Linn School Board, Brownsvillle City Council, Chamber of Commerce, Lion’s Club, and was Pioneer Picnic Parade Chairman in the 70’s. He was also instrumental in the construction of Brownsville’s Kiddie Corral west of the Rec Center and the cities tennis court. He and the family donated dirt, rock, equipment, and labor for both projects.

Fred was a beloved Grandpa. He was known for making the best hot cocoa and for giving the best hugs and snuggles. He never knew a stranger and was loved by many.

He was preceded in death by his oldest daughter Sally S. Wilson of Oakland; brothers: Harold and Lee; and his parents.

Open House Memorial for family and friends will be 1 – 5 pm Saturday November 26th at Fred and Edi’s “cabin in the woods”. 500 Locust Street, Brownsville.

Memorial contributions can be made in his name to Albany’s Samaritan Evergreen Hospice House.