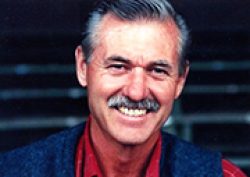 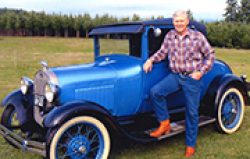 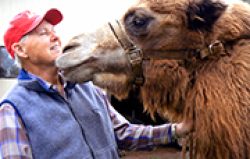 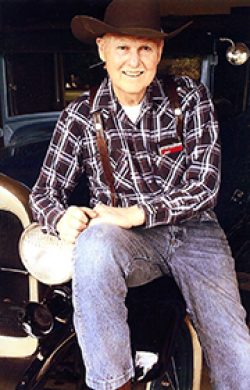 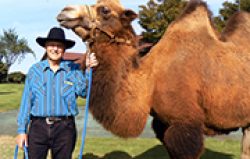 There will be a Celebration of Life for Frank at the Community Chapel on May 21st at 3:00 pm. Please plan to join us, and plan to have a classic Frank McCubbins good time.

The McCubbins family announces that their amazing husband, father, grandfather and great grandfather has gone to be with his Lord and Savior. Frank Jay Neal McCubbins, 84, of Sweet Home passed away Wednesday.

No one could have lived a fuller, more joyful life. He will be greatly missed by not only family, but friends that he has made far and wide. Owner of Glacier Springs Farm in Sweet Home, hundreds of people have been to see his collection of exotic animals, and the lucky ones were given a full tour, which usually included a camel ride, a drive in a 1928 Model A, a few practical jokes, and a shot out of the bowling ball cannon.

His school years were difficult; Frank had Dyslexia, a learning disorder which was unheard of during his years of schooling. Frank made it to the 5th grade without being able to read. He would fondly tell the story of his 5th grade teacher, Mrs. Pikenpaw, who was the first teacher in his life who didn’t want him to leave her class without learning to read. She gave him comic books, where the pictures told the story and caught his interest. Once he could read those, she began to give him the classics; Tom Sawyer, Moby Dick and Treasure Island were just a few.

This began a love of reading for him that lasted a life time; he even became an author himself, writing several books for his family.

One of his works, Animal Tales, was so loved that many people outside the family wanted copies, and soon letters came in with orders for the book from as far away as Australia. Many times he said that Animal Tales was one of the most rewarding things he had ever done. And that was a saying a lot, because Frank accomplished so many, many things.

A star athlete at Santa Anna High School in California, married his high school sweetheart, Johanna Palmer, in 1950, and despite very humble beginnings, by age twenty, he was a successful, self-made business owner. Using scrap materials, he build a complex of kennels boarding up to four hundred dogs and cats. Then expanded to add on 100 horse stables and show arena. He also invested early on in land and with his family, planted 16 acres of orange trees by hand, the sale of which allowed them to buy their home and ranch in Oregon in 1969. His hard work enabled him to retire at age 39, but he often said that his work on the farm was the hardest of any he had ever done.

He began his walk with the Lord with great joy in 1970, joining the Community Chapel with his family.

A horseman, hunter, animal trainer, (even training animals to be in short nature films for Walt Disney), dealer of exotics, a co-builder of the Santa Anna Zoo, archer, woodworker, potter, arrowhead knapper, tennis and racquetball player, collector, writer, Para-plane pilot, world traveler, volunteer and supporter of mission work all over the world. For his 60th birthday he went skydiving. In his early 70’s he hiked the length of Oregon in four sections on the Pacific Crest Trail with his daughter Susie, using different pack animals for each section; llamas, goats, mules, and a camel.

Frank and Jo were married 66 years and have four children, eight grandsons, and ten great grandchildren.

Frank brought friends into his life so warmly they felt like family. He was famous for creating fun, and was not satisfied to live each day of life to its fullest alone; he forced everyone around him to do the same.

“The Lord says, “I will save the one who loves me. I will keep him safe, because he trusts in me.

There will be a Celebration of Life for Frank at the Community Chapel on May 21st at 3:00 pm. Please plan to join us, and plan to have a classic Frank McCubbins good time.