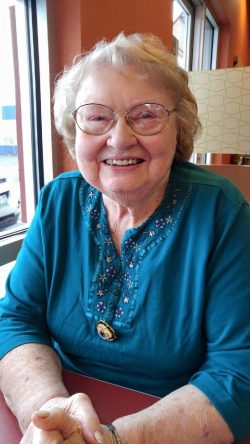 Viewing will be Noon Friday September 17th at River of Life Fellowship. Funeral services will follow at 1pm. Final Burial will be at Lewis Cemetery. In lieu of flowers, donations may be made to SafeHaven Humane Society in Tangent, Oregon.

Frances Naomi Babcock, 97, of Sweet Home, passed away Saturday morning, September 4th, in Lebanon. She was born in Masontown, Pennsylvania on March 15, 1924 to Edmund and Ruth (Lee) Durr.

Growing up during the Great Depression, she learned to work hard at a very young age, but retained a cheerful, hopeful disposition her entire life. She left home at 14, working as a housekeeper and later at a U.S. Rubber factory in Detroit during the war. She then went to California and worked at a five-and-dime store and a diner where she met Guy Babcock. He was the light of her life–she knew she’d marry him the first time she saw him come into the diner to eat. Three months later, they married on March 9, 1944.

After marrying, Guy and Naomi moved to Oregon and had two children, Randy in 1946 and Lee Ann in 1951. They operated a fuel station in Jefferson, a cut-stock mill near Lebanon, and eventually settled on a farm in Pleasant Valley near Sweet Home. They raised livestock, cannery crops, and ran the Babcock Bean Field while Guy was a truck driver. Naomi also owned the Gateway Cafe and later became a baker at Sweet Home High School. She retired from the school district as a laundry operator in 1991.
Naomi’s greatest enjoyments in life were her grandkids and her dogs. Many were comforted by Naomi’s sweet and gentle touch, she cared for her family in a way that will unlikely ever be matched. She cooked countless meals for those she loved, and enjoyed the company of family, friends and neighbors. She was involved with the Home Extension club for years, and enjoyed baking (gingersnaps were her specialty), reading, and doing crossword puzzles (in ink).
The matriarch of her family, she is survived by her brother David Durr; grandchildren: Tony Babcock, Julie Miller, Mark John, and Becky Haylett; 11 great grandchildren: Bethany, Hannah, Nick, Alex, Stephanee, Ryan, Kendall, William, Owen, Hunter, and Justen; 3 great-great grandchildren: Naomi, Gavin, and Adalin; numerous nieces and nephews; and daughter-in-law Sherryl. Her little dog Gracie is also worth mentioning.

Naomi is preceded in death by her parents; husband Guy in 1989; son Randy in 2014; daughter Lee Ann John in 2020; son-in-law Duane John in 2000; brothers: Lee Durr in 2009 and Clayton Durr in 2020; sisters: Jane Torrance in 2009 and Ruth Cook in 2021: and a grandson Mark Alan Guy Babcock in 1964, a loss she never quite got over.
Those near Naomi were blessed with her sharp mind and gracious heart. She was encouraging and courageous in any circumstance or hardship, and will be greatly missed.
Viewing will be Noon Friday September 17th at River of Life Fellowship. Funeral services will follow at 1pm. Final Burial will be at Lewis Cemetery. In lieu of flowers, donations may be made to SafeHaven Humane Society in Tangent, Oregon. Sweet Home Funeral Chapel is handling arrangements. www.sweethomefuneral.com