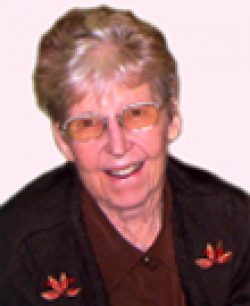 Mickey was born in Raymond, Washington, on April 10, 1922. She died Sunday, June 1, 2008, surrounded by her family at Samaritan Albany General Hospital from complications after having suffered a stroke in 2006.

Mickey was the third child of four born to Gordon and Delma King. It was her father, the superintendent of Willapa Harbor Lumber Company, who started calling her “my little Mick” because of her red hair. In those days, ”Mick” was the slang word for Irish. Her childhood friends called her Mickey. And everyone who knew and loved her has called her that since.

After graduating from Raymond High School, Mickey attended Bellingham Normal for a year before marrying Joseph Ponzoha on June 18, 1942. While her husband was in the service during W.W.II, Mickey was a “Rosie the Riveter” at Boeing Aircraft in Seattle, Washington. At the end of war, the couple moved to Oregon and have lived in Sweet Home since 1947.

Mickey was an energetic and loving mother and homemaker. When the youngest of her seven her children entered grammar school, she worked as a librarian for the Sweet Home School District until she retired. Mickey loved to sew and arrange flowers. She was an active member of St. Helen’s Catholic Women’s Society and a community volunteer until her stroke in 2006.