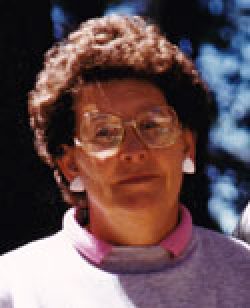 Florence Robeson, 90, of Salem, Oregon (formerly of McMinnville) passed away Friday, January 30. She was born in Veblen, South Dakota to Leslie and Ella (Beling) Birdsall on May 23, 1924. Florence was raised as a Protestant and was a member of the First Christian Church in McMinnville.

She moved to Sweet Home with her parents and siblings when she was young. She met Roy Robeson one night when she was skating at the roller rink in Sweet Home and liked him partly because of his car. They fell in love and were married on September 25, 1943 in Vancouver, WA. They have three children.

The family moved to Newport, Oregon in 1957. While living there, they had a lot of company and spent a lot of time on the ocean fishing. Florence would sometimes get seasick, but would not give up her fishing pole. She would lay in the bottom of the boat holding her pole till she had a fish, land the fish, put her line back in the water, and lie back down till she hooked another fish. The family moved to McMinnville in 1966. She worked part-time as a secretary at the mill where Roy worked. In 2013, Florence and Roy moved to Salem/Keizer.

Florence and Roy were considered snow birds. They enjoyed the warm weather of California during the winter months. Florence also loved golfing, bowling (she was on a bowling league and bowled a 200 game), biking, fishing, camping, gardening, traveling, sports, sewing, and games of all kinds. Most of all, she loved spending time with family and friends. Her face would light up when she would see her children and grandchildren.

She is survived by: her three children, Sandy McCaskey of Salem, Joanne Pratt of Redmond, and Dan Robeson of Sheridan; nine grandchildren and 14 great grandchildren.