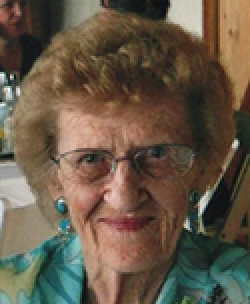 The funeral service will be at 11:00 a.m., Saturday, November 17, at United Methodist Church in Sweet Home. Final burial will be at Gilliland Cemetery.

Evelyn Dalton, beloved mother, green thumb at growing flowers, baker of delicious pies, and awesome piano player of western swing, passed away at the glorious age of 90. Evelyn was born to Herman and Hattie Roberts in the small town of Colcord, Oklahoma.

She wasn’t alone growing up on the family farm, as she was surrounded by five brothers—Howard, Clinton, Cotton, Roy, and Donald.

On September 30, 1944, Evelyn married Edgar Dalton. After moving several times, they came to Oregon in 1946. Together they raised three children. One of their biggest accomplishments was building their own home along the Santiam river, where she resided for over 50 years.

She loved to cook, especially southern style. Her ability to take a little of everything in the kitchen and turn it into a soup 30 minutes later was uncanny. Pies were her specialty, from cream to fruit, they teased your taste buds, a crust that would melt in your mouth and kept you coming back.

When it came to flowers, she treated them like her children, always nurturing them daily to ensure they grew. If it was a seed, she would plant it just to see what she would get. She even started a rosebush once from taking a cutting from a bouquet of roses and inserting it into a potato to get it started. This is also a gift she learned from her mother. Her words, “I love to plant flowers. I like to see the beauty of anything grow.”

Music was the love of her life early on from listening to her mother play gospel music on the piano. She acquired her first musical instrument by selling packets of seeds. Her talent as a musician was truly a gift from God, as she never learned to read music. For her it was a matter of listening to the music greats or a jukebox and then setting down to a piano and letting the magic of her fingers dance across the ivories sending out notes to songs she had heard. At age 15, she sang with her brother on a weekly radio show in Oklahoma, having the ability to harmonize with anyone she sang with. Later, she played at the well known Cottonwoods, just outside of Lebanon, while carrying her third child. From big band to country western, she played it all.

She was proceeded in death by her husband, Edgar, in 1984, and her brothers over the years.

The funeral service will be at 11:00 a.m., Saturday, November 17, at United Methodist Church in Sweet Home. Final burial will be at Gilliland Cemetery.