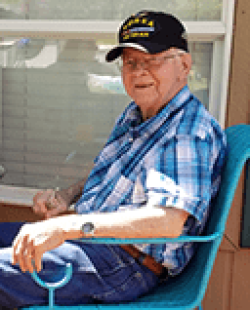 A graveside service with military honors will be at 1:00 p.m., Friday, December 6, at Gilliland Cemetery.

Gene was very close to his family and they have many, many happy memories to keep. He was very proud of his granddaughter, Norma Jean Hartman. He was not only Grandpa to her, but also raised her like a Dad. He never met a stranger. He loved people and enjoyed talking to everyone.

Six weeks after getting married, Gene was drafted in the Army and served two years in Korea. Afterwards, he studied Electrical Engineering at Weber State University in Ogden UT.

Gene worked in several jobs throughout his life. Some will remember the Amundson bean yard in Liberty. He also owned and operated two dump trucks, as well as doing mill work and construction.

Gene enjoyed fishing and was an avid hunter. He loved hunting in the Sisters area and Ukiah. He also enjoyed going to the races at Willamette Speedway.

After his wife and son passed away in 2006, he enjoyed traveling with his daughter and granddaughter. They went to a Yankee game in Seattle for his first pro ball game, as well as trips to Reno, Virginia City, NV, Paradise CA, and enjoyed the Veterans’ Freedom Flight to Washington DC in 2017. He enjoyed Casinos, his pets and feeding wild animals in his yard.

He is survived by his daughter, Diana, and son-in law, Jack Henthorne, of Sweet Home; granddaughter Norma Jean Hartman of Sweet Home; sister Anita Clifton of Lebanon; brother Alton Schaff of Lebanon; sister-in-law MaryAnn Amundson and Dave and Pat Turk of Rieth; as well as many nieces, nephews and friends.

He was a special man who was loved very, very much and will be greatly missed but always remembered.

A graveside service with military honors will be at 1:00 p.m., Friday, December 6, at Gilliland Cemetery.