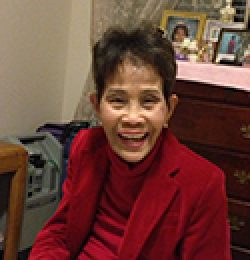 She lived in Santa Barbara, Iloilo; Cabatuan, Iloilo; Rizal and Antipolo Philippines. She came to the United States in 1998 and lived in Philomath, moving to Albany in 2008 and, finally, to Foster in 2013.

Epifania loved to go to church and hear mass. She was involved in religious volunteer work in the Philippines.

She enjoyed sewing and gardening and was a compulsive cleaner. She loved reading and taking care of her grandchildren and family.

Memorial Mass will be at 11:00 a.m., Thursday, August 25, at St. Mary’s Catholic Church in Albany.
Sweet Home Funeral Chapel is handling the arrangements.