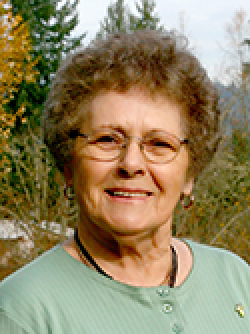 Graveside service will be at 11:00 a.m., Thursday, October 18, at Gilliland Cemetery.

Emmy Emma Dimick, 90, of Sweet Home, Oregon passed away Sunday, October 14, 2018. She was born in Worms, Germany to Wilhelm and Maria (Besch) Holz.

She was raised in Worms, Germany. She married Chauncy Dimick in August of 1948 and moved to Sweet Home shortly after. After moving to Sweet Home, she proudly became an American citizen. Emmy and Chauncy built a house up Wiley Creek, the same house she was to live in for the next 65 years. A few years back, she moved into Wiley Creek Assisted Living.

Emmy and Chauncy would fish and hunt together. She also enjoyed knitting, crocheting, and gardening.

She worked in the sawmill, pulling on the green chain. She was also a cook at a school cafeteria. She attended the Lutheran Church and was a life-long member of the Elks Club.

Emmy is survived by her sister, Maria Schick, of Germany; and several nieces and nephews.

She was preceded in death by her husband, Chauncy; daughter Rita; and five brothers.

Graveside service will be at 11:00 a.m., Thursday, October 18, at Gilliland Cemetery.