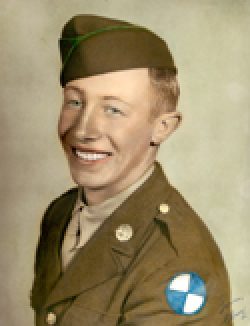 A service will not be held at his request, however, donations can be made in his name to the Crook County Historical Society located at 246 North Main Street, Prineville, Oregon 97754.

Our world became a lesser place in which to live on February 25th with the passing of Elroy Lamon Fuller, Sr. Elroy was born in Prineville, Oregon March 12, 1923 to Wendell and Edythe (Wonderly) Fuller. His mother passed away from complications of birth three weeks after he was born, and Elroy was raised by his maternal aunt, Claudia Wagoner, and Ernest Wagoner on a ranch north of Prineville.

He was the best man we ever had the good fortune to know. A soldier in World War Two’s Pacific Theater, a husband of 64 years, a father, a grandfather, and a great-grandfather. He was an Oregon State Trooper, a City of Prineville Policeman, a mill worker, a farmer, and a business owner. He finally received his high school diploma from Crook County High School June of 2008, having missed his graduation with the class of 1942 due to enlisting in the US Army. He was proud to be the 4th generation of his family to graduate from Crook County HS.

Overcoming life threatening and ultimately debilitating polio in 1959 at age 36, he spent eight months in the Portland VA hospital recovering and rehabilitating. He would not let that and later health problems keep him from living his life to the fullest. He kept on doing the hard things and the right things that made him a person you would like to know.

A service will not be held at his request, however, donations can be made in his name to the Crook County Historical Society located at 246 North Main Street, Prineville, Oregon 97754.