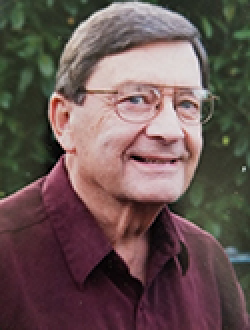 A memorial service will be at 11:00 a.m. Saturday, August 25, at the Church of Jesus Christ of Latter-day Saints in Lebanon.

Edwin “Ed” John Cafarelli was born on Christmas Day, 1936 in Willamina to Aurthur and Lillian(Johnson) Cafarelli.

Ed attended Willamina schools until he graduated first in his class in 1953. As a young adult, Ed worked in the local grocery store, eventually becoming part owner.

During the early days, he met and married his first wife, Patricia. Together they had two children: Brad and Janay Cafarelli. After unfortunate and unforeseen events, Ed met and married Judy Ann Hines and joined the Church of Jesus Christ of Latter-day Saints. During their 41 years together, they raised her children: Carrie, Preston, Mike, and Cami.

Ed retired in 1998 from McDonald Wholesale. He and Judy moved to Idaho Falls, planning to live out their “Golden Years” together. Two years later, Ed’s health began to fail. For the next 18 years, Ed fought a heroic battle. He endured countless trips tot he hospital and over 15 years of dialysis. During that time, he enjoyed spending time with his grandchildren and gardening. He passed away early August 3, 2018 with is family by his side.

Through it all, Ed will be remembered for his humor and his sweet disposition. Every person Ed knew was his friend, and they felt it. He touched the hearts of many with his gentle spirit. Ed’s parting wish was that everyone know “Life is good!”

Ed is survived by his wife, Judy Ann Cafarelli; his children: Brad, Janay, Carrie, Preston, Mike, and Cami; his 17 grandchildren; and one great-grandchild waiting to be born any time!

A memorial service will be at 11:00 a.m. Saturday, August 25, at the Church of Jesus Christ of Latter-day Saints in Lebanon.