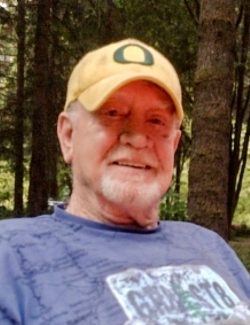 Ed was born in Elk City, Okla., where his parents were dairy farmers. His parents moved to Merced, Calif., and later Lebanon, Ore., where they had another dairy near the South Santiam River. Ed served four years in the U.S. Army, and after that spent many years living in Eureka, Calif., where he earned a bachelor’s degree from Humboldt State University and a master’s degree from the University of San Francisco.

Ed spent the second half of his life living in Lebanon and Sweet Home, where he worked for the State of Oregon. Ed was a lifelong Oregon Ducks fan. He loved to cook and always looked forward to preparing a Christmas Eve feast for his family. He cherished spending time with his wife, three daughters, and three grandchildren.

Ed was a prolific reader. He had a passion for gardening. He loved to be outside and made efforts to have at least one outdoor adventure every year, whether it was hiking in the Oregon outback or rafting the Colorado River in the Grand Canyon. Ed had many friends throughout the Western region and was well liked and well respected in his career and the communities in which he lived.
Ed is survived by his wife, Mindy; daughters Lacey, Mandy, and Jackie; grandchildren Abigail, Marshall, and Spencer; and many extended family members in Oregon and throughout the U.S.
Ed was preceded in death by his parents, Lonnie and Doris, and brothers Dick and Lonnie Jr. (Scooter).
A celebration of life will be held in 2022.
Sweet Home Funeral Chapel is handling arrangements. www.sweethomefuneral.com