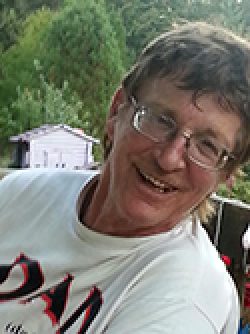 Delbert Richard Gilbert, age 66 of Lebanon, passed away early Tuesday morning in his sleep, putting an end to his battle with colon cancer. He was born in Toledo to Gerald (Jerry) Gilbert and Ruth Maxine (Wycoff) Gilbert. Ruth was later married to Roy Wilburn Tate, who was the father figure in Delbert’s life since he was a toddler, learning his booming voice, parenting skills and quiet, respectful demeanor. The core skills he learned from his mother and stepfather helped make him the amazing man he was.

He lived his early years on the coast near Newport and spent 10 years in northern Iowa in the ’70’s and ‘80’s. Except for a few years in the LaGrande area, he spent the remainder of his time in the Sweet Home, Lebanon and Albany areas.

Delbert was a firm believer in education and was the first male to graduate from the Albany College of Beauty. He has received an A.A.S. in Metallurgy and Materials Testing Technology in 1998 and an A.A.S. in Machine Tooling Technology in 1999, both from Linn-Benton Community College, and finally, a B.S. in Housing Studies with a minor in Interior Design from Oregon State in 2010 at the age of 60.

He practiced Cosmetology in both Iowa and Oregon, being behind the chair, training students or managing salons. He gave stage presentations for Revlon and L’Oreal. During this same time period, he was also a General Contractor, starting as a carpenter and eventually owning Gilbert Construction for a short period, in both states.

A contruction accident cut his working career short, which enabled him to devote his time to his two youngest children, personal projects and helping others. Delbert helped remodel the Sweet Home Rio Theater and Lebanon’s Kuhn Theater. In the years prior to his diagnosis, he worked part-time at Oregon State Event Services.

Delbert was a kind-hearted person, a great listener and a fantastic sounding board. He had a great sense of humor: always joking around and making others laugh. He touched the lives of everyone he met, bringing smiles to their faces and peace to their hearts.