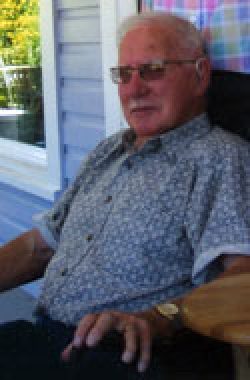 A service will be held at 11:00 a.m., Friday, May 27, at Sweet Home Evangelical Church. Burial will follow at Gilliland Cemetery.

In lieu of flowers, please send contributions in Delbert’s memory to Evergreen Hospice.

Delbert E. Starr, 91, of Sweet Home passed away Tuesday at Wiley Creek Community. He was born in Alpine, Oregon to James and Lou (Thiele) Starr. He was the third of three children, with an older sister and brother. He grew up in Coos County, graduating from high school in Coquille.

Del married Doris King of Sweet Home on April 18, 1943 in Anchorage, Alaska. He soon joined the U.S. Army Air Corps, now the Air Force. He flew C-46 cargo and B-25 airplanes in the 101st Airborne Division during WW II until the war ended.

After the war, Doris and Del returned to Sweet Home where they built their first home. The following spring, they moved to Alaska and lived there until 1949 when they returned to Lebanon. They settled in and remained in Lebanon until November 2010 when they moved to Wiley Creek Community in Sweet Home.

Del worked as a construction contractor for most of his career. He spent several years building houses with his brother as Starr Builders and later was a partner in CPS Construction doing industrial construction. After retirement from CPS, Del started a construction company in Alaska with his two sons, Jim and Dennis.

Del is survived by: his wife, Doris; sons, Craig (Sharon) and Jim (Martha) of Lebanon; daughters, Sheri (Scott) Richardson of Oregon City and Kim (Mark) Prescott of Albany; eleven grandchildren; nine great grandchildren; and one great grandchild. He was preceded in death by: his parents; sister, Verna; brother, Roy; and son, Dennis.

A service will be held at 11:00 a.m., Friday, May 27, at Sweet Home Evangelical Church. Burial will follow at Gilliland Cemetery.

In lieu of flowers, please send contributions in Delbert’s memory to Evergreen Hospice.