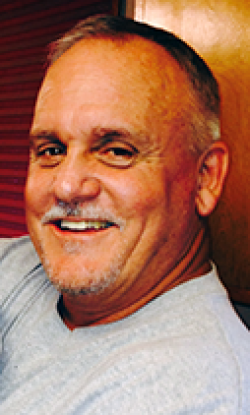 Service and Celebration will be held 1 pm January 12, 2019 at the Sweet Home community Chapel. Please come and share your favorite fishing or hunting story.

David Paul Lambert, 63, of Sweet Home, Oregon passed away Thursday, December 27, 2018. He was born in McMinnville Oregon on Valentine’s Day to Armand and Mary Louise (Wilcox) Lambert the fifth child of six to be born to them.

He grew up in the McMinnville area until his 30s. He graduated from Dayton High School and was all-state in every sport he played while he was there. He got a full-ride baseball scholarship to College of Idaho and went to school there for a couple of years. He chose to move back to the McMinnville area when his daughter, Summer, was born with his then wife, Linda Plemmons. They divorced and Dave remarried Sue Coyle and had boys Eric and Brady Lambert. Dave met his current wife in 1990, and with that marriage acquired his daughter, Samantha Cope, whom he raised from the age of two. Dave and Beth brought this blended family together and raised them as one against all odds.

Dave worked in electronics most of his working life which included sales, service, and repair until he and his wife, Beth, decided to move to Sweet Home in 2000 and take over a State Farm Agency. He worked as her right-hand man, her landlord, and her go-to guy. Whatever she needed help with, he was there.

BUT…..the Love of his Life was FISHING, some might call him a legend (at least that is how he referred to himself), and if Dave had any free time, you might have found him on the river. When he wasn’t fishing or hunting, he was planning his next trip. His fishing and hunting buddies meant the world to him – Mike, Mike & Mike, Steve, Rob, Brent, Keith, Jimmy, Ben, Tom, Randy, Jason, Mitch, Alan, Brian, Craig and many more. His Hunting days were also very dear to his heart, and he was able to hunt and mount animals in his lifetime most men will only dream of.

This Dave of ours – husband, dad, friend, brother, uncle, and more – He “LIVED” his life, he didn’t hold back, and he had no regrets. Most people knew he had cancer beginning in 2011 and you never heard him ask, “Why Me?” or see him get angry about it. He faced his challenges head on. He was a man, a real man, one tough son of a gun, with the greatest sense of humor ever. That’s how he did life, and that’s how he did death, with honor.

He left a large mark on our hearts and a huge hole in our lives but his “FISH ON!” will ring in our ears forever.

Service and Celebration will be held 1 pm January 12, 2019 at the Sweet Home community Chapel. Please come and share your favorite fishing or hunting story.