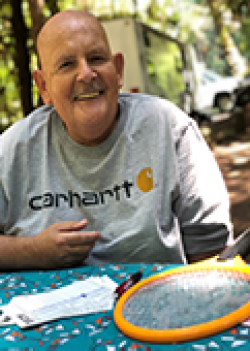 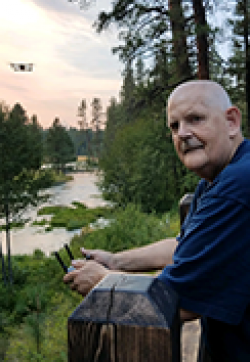 A private celebration of life will proceed when it is deemed appropriate.

“With Love and Respect”

Daniel Fred Schroeder, age 61, of Sweet Home, passed away the morning of April 10, 2020 peacefully at his home. Although he entertained the idea of living a lavish retired life somewhere in Mexico, Dan took pride in his hometown where he spent the majority of his years close to family.

He was born in the coastal town of Gold Beach, Oregon, September 30, 1958 and raised by his grandparents Fred and Marie Schroeder. Prior to settling in Sweet Home, his family spent time in Springfield, Oregon as well.

Growing up in Sweet Home began while attending Holley Elementary through Sweet Home high school. During his high school years he developed a passion for sports, lettering in wrestling and football. Wrestling coaches Norm Davis and Ed Nieman instilled an insatiable desire for grappling that would remain until the end of his days. Aside from sports he found time to develop an interest in wood working, the tradition of hunting as well as a love of American muscle cars.

Dan chose to serve his country in the United States Navy beginning in the fall of 1976 following his senior year at Sweet Home High. The majority of his Naval Career spanning from 1976-1980 was spent aboard the USS Proteus stationed in Guam as a Hull Tech. Guam offered an amazing underwater landscape that he enjoyed exploring while Scuba diving during his time there. His time while actively serving in the United States Navy would be highlighted by starting his family. During these four years he would marry Gwen Sparhawk the mother of his first two children Jill and Daniel.

After returning home from the Navy, Dan began a job at a local homegrown company, Slip n Snip scissors followed by a brief stint in Local Law enforcement. Before his retirement as a disabled veteran, he held a job as a Supervisor at Rainier Wood Products.

Dan’s family would be further enhanced when his third child Whitney would be born in 1989. In 1997, he would marry Michelle Bowen, the woman who would be by his side until the present. With this union he gained a son David who was only three when they had met.

His last twenty three years shared with Michelle were filled with making memories while getting away to some of his favorite locations together, Camp Sherman on the Metolious river, Clear Lake, California Redwoods and Lincoln City to name a few. Loading up in a Recreational Vehicle and getting lost on a camping excursion or vacation ranked high on his list of favorite things to do. Dan took pride in his mechanical abilities and would lend his skills to others.In recent years he enjoyed ATV’s as well as the hobby of drone piloting and drone photography. Preserving his love for wildlife and the outdoors through photography was often a daily occurrence granted by his beautiful northwest settings. Dan was especially proud to share photographs of a local herd of Roosevelt Elk that he was fortunate enough to capture in recent months.

Making Dan’s acquaintance wasn’t ever a challenge. He possessed a proud yet approachable presence that welcomed the opportunity for good conversation or an audience for one of his well told stories. Lending a helpful hand was just part of his nature. He actively sought the opportunity to take care of those around him. His mischievous sense of humor made an impression on many. Finding strength through faith was a big part of his existence.

Being blessed in the role of grandfather began in 2010 for Dan with the birth of his first grandchild Russell followed by Tyson in 2013. Cheering on his grandkids through life and sports filled his heart with an enormous amount of pride that was always boldly on display.

Daniel was preceded in death by his parents Fred and Marie Schroeder; his brother Terry Lewison.

A private celebration of life will proceed when it is deemed appropriate.

“With Love and Respect”