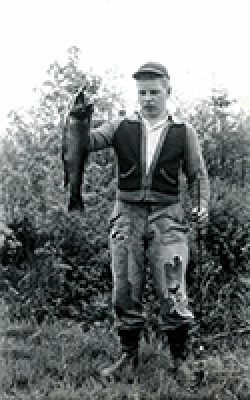 The family is planning a memorial celebration. Details will be forthcoming.

Craig “Doc” Marble passed away September 12 after 88 good years; most of them lived right here in Linn County. He was born in Sherman Station in Aroostook County, Maine to Harold and Dorothy (Craig) Marble.

Doc was raised in Sherman Station. This was a land of bitter cold winters and black-fly summers; a place where potatoes and pine trees were the only crops to survive. His parents, Dorothy and Harold Marble, prepared their sons, Craig and Walter, for a hard life by having horse-drawn loads of logs delivered to the front yard where the boys learned the joys of wielding a cross-cut saw. And while there were a few spare minutes each summer for baseball and fishing, there was lumber to be stacked at the mill, firewood to be delivered, rocks and potatoes to be picked.

Craig could see the life that lay ahead, so when he turned sixteen he enrolled at the University of Maine, sending his laundry home to Mom each week on the train. After three years, he graduated and was accepted by the dental school at Tuft’s University. Graduating as a dentist at the tender age of twenty-two, Craig found it impossible to buy a dental practice, as no bank would loan money to such a young man. Instead, he accepted a commission in the Public Health Service providing dental care to the U.S. Coast Guard.

He was posted on the West Coast where he met his bride, Agnes. She was charmed by his odd Yankee accent and taken in by his tennis game. (He possessed a ferocious forehand; the product of all of that firewood cutting.) Following a short courtship, they began their life together in a big Buick Roadmaster and an Airstream trailer, traveling to Coast Guard bases from San Franscisco to Neah Bay. Craig always claimed these were the most profitable days of his career: travel pay, off-base housing pay, Lieutenant’s pay, and a young wife who liked to cook. Plus, on occasion, a Coast Guard cutter made a pretty good salmon fishing platform.

Eventually, the young couple settled on a small ranch on the banks of the Willamette River near the Riverside community. Craig opened a dental practice in Albany while Agnes raised the kids on the farm. In 1968, the family moved to Crawfordsville and established the Lazy M Ranch. Craig continued to care for his patients for 30 more years, building a new office and a large practice. His weekends were spent building miles of fence, cutting firewood, and working the forested acres of the ranch. As time went on, Craig spent more time in the woods, thinning, pruning and dragging out a few logs, too. Eventually, he purchased more timberland where he routinely demolished pickup trucks, chainsaws and logging equipment. Boy, did he have fun! He also renewed his interest in fishing, chasing salmon and steelhead in freshwater and salt from Oregon to Alaska. His favorite stories involved fishing with friends and family, especially when he caught the biggest fish.

Craig spent many Saturday afternoons at OSU Beaver Football games. He was a beloved figure in his section, barking out “Go Beavs!” at odd moments and joining other enthusiastic fans in hoisting shots of whiskey after each touchdown. Those were tough years for the Beavers. So bad, in fact, that every first down was similarly celebrated.

Craig was also a community servant of sorts, donning a big red suit each year to play Santa for hundreds of Crawfordsville kids. He also enjoyed delivering firewood to widows, hiring local kids to pick up garbage from the ditches along Brush Creek, and giving free-but painful cribbage lessons to anyone who would consent.

He is survived by children John, Jim, and Jay, and a herd of grandkids and great grandkids with more coming soon. Craig was preceded in death by his wife, Agnes Ann (Slobojan); daughter Kirsten; and sons Kenneth and Dennis.

The family is planning a memorial celebration. Details will be forthcoming.