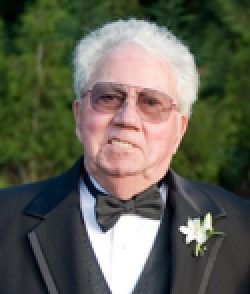 Clinton Bennett, 88, of Foster, Oregon passed away peacefully in Seaside, Oregon with his son and daughter-in-law, Roy and Sheila Bennett, at his side. He was born to Norval and Lucille (Whitworth) Bennett in Mitchell, Nebraska. During his early years, the family moved to Oregon where he graduated from Sweet Home Union High School in 1941.

After high school, Clinton worked as a heavy equipment operator. He served in the US Army during WWII from 1943-1946 with Headquarters Company 526th Armored Infantry Battalion as a tank driver. He received a bronze star for his meritorious achievement during the Battle of the Bulge along with numerous other honors.

During his service in Europe, he met his sweetheart, Hilda Ditchfield, who worked in the Royal Ordinance Factory in England. They married January 3, 1949.

Following WWII, Clinton owned and operated Bennett & Son Shell Service east of Sweet Home with his father. In 1969, he closed the station to teach automotive classes at Sweet Home High School until his retirement in 1985.

He enjoyed camping, fishing, tinkering, gardening, baseball, football, and being a community volunteer.

Clinton was preceded in death by: his wife of 54 years, Hilda; his sisters, Susan Williams and Dorothy Nelson; his brother, Edward Bennett; and his grandson, Brian Bennett, Jr.

He is survived by: sons, Brian (and his wife, Becky) of Colorado Springs, CO and Roy (and his wife, Sheila) of Seaside, OR; brother, Leo (and his wife, Barbara) of Sweet Home, OR; grandsons, Justin of Gearhart, OR, Jared of Foster, OR and Drew of Corvallis, OR; and three great-grand children, Derrick and Ellie Bennett of Gearhart and Kinsley Bennett of Foster; and many nieces, nephews and cousins.