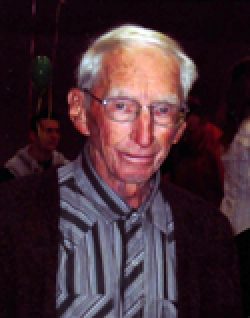 Clifford Charles Wolfer, 97, went home to be with Lord on Sat., October 23, from Sweet Home, Oregon. Clifford was born April 15, 1913 in Hubbard, Oregon to Hugh and Lillie Schrag Wolfer. His mother passed away in 1923. There were five children born to this union: Clifford, Clayton, Helen, Blanche, and Luella. Later, his father married Ina Hostetler and they had four sons: Hughey, Lynn, Roy, and Les. The family moved to the McMinnville/Ballston area in 1929 where Cliff was involved in farming and logging using horses much of the time.

He married Mildred Shenk on October 28, 1934 in Sheridan, Oregon. They lived and worked there until 1938, and then they moved to Sweet Home where he continued in the logging industry as a truck driver and steam donkey operator.

In 1941, he purchased his own log truck and hauled logs for the next 37 years. Twenty plus of those were with Duncan & Moore Logging of Sweet Home. He retired in 1978 and sold his truck. However, he continued to haul logs for local operators as a relief driver for several more years.

Cliff and Mildred enjoyed traveling and photographing their trips. They went to the scenic spots of the western U.S., as well as western Canada. They took several trips to Nebraska to see Cliff’s brother and his family. They took annual trips to Chickahominy Reservoir and Delintment Lake for fishing. He liked to hunt, also, going many years to the Ukiah area of northeastern Oregon. His last hunting trip was a four generation elk hunting excursion when he was 95.

He received much enjoyment just working around his home where he lived from 1945 until 1 month prior to his death. He liked to raise flowers and a garden.

He loved to have his family come to see him and he would tell stories from his life. Most of all he loved the Lord and served Him from an early age.

He was preceded in death by: his wife, Mildred; his son, Robert; brothers, Hughey and Clayton Wolfer; and sisters; Helen Miller, Blanche Kilmer, and Luella Nice.