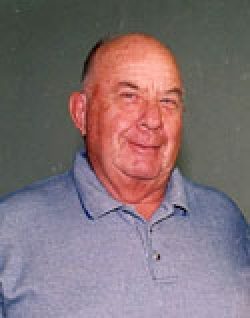 Bruce’s memorial service will be held at the Sweet Home High School Track at 6:00 p.m., Thursday, May 26th, rain or shine. Reception will follow at the Boys and Girls Club.

In lieu of flowers, the family requests donations be made in his memory to Sweet Home Aquatic District Fund, P.O. Box 593, Sweet Home, Oregon 97386.

Bruce M. West, 79, of Sweet Home passed away Thursday. He was born in Idaho Falls, Idaho to Lewis Lesley and Edith (Burkeman) West, the youngest of three boys. He grew up on a Swedish farm growing potatoes for harvest and spending many hours on horseback moving cattle.

He attended New Sweden Grade School and Idaho Falls High School participating in almost all the sports offered. He received his bachelor’s degree from the University of Idaho in 1965.

He married his best friend, Jeani, in June of 1962 in Idaho Falls nearly 49 years ago.

Throughout his own athletic career, he played college football, boxed, skied, played basketball, bowled, and fast-pitched softball competitively, winning an MVP award for leading his softball team to a state title. He continued to play golf until his early 70s and won many a local tournament until his son started taking the titles.

Although in Idaho Falls, he started out as a physical education (PE) and biology teacher in 1954. From 1958 to 1961, his love of sports led him to work at the ski shop at Sib Kleffner Sporting Goods Store, ultimately managing a second store for Kleffners in Caldwell, Idaho.

His love for kids, teaching, and coaching, combined with encouragement from Norm Davis, drew him back to teaching science in nearby Parma. Highlighting his time in Parma, he coached football and wrestling and led the track team to capture the state title. His success led to a recruitment call from Kenai, Alaska where he was hired to start their first football program, as well as teaching PE. In his two years there, he guided some of whom had never even seen the sport played to two winning seasons, culminating in the community declaring a “Bruce West Day” in his honor. He continued to coach wrestling in Kenai.

In 1970, his friendship with Norm Davis drew him to the Sweet Home area to teach PE and health. He spent 40 years coaching track, wrestling, football, crosscountry running, water polo, golf, diving, and for the longest time, assisted Doug Peargin with the swimming team.

He retired from teaching in 1993, but continued to serve the athletes through 2011. 2010 marked his 50th year of coaching youth, which was honored by the Oregon Athletic Coaching Association.

To help his athletes compete, he learned athletic training, going on to spend thousands of hours taping kids’ injuries or helping to protect against injury. He was the head trainer for all activities in Sweet Home starting in 1989.

In his spare time, he loved to fly fish, tie his own flies, and hunt, often at the family log cabin in Island Park, Idaho, that he built with his dad.

He will be remembered as a teacher and a coach who played no favorites and was fair to everyone whether they were a talented athlete or regular run-of-the-mill student. Each one was graded on his own ability, not some standard set by others.

He is survived by: his wife and best friend, Jeani West; his daughter and her husband, Peggy and James Curtis of Battle Creek, Michigan; son, Craig West (and Traci) Gates of Sweet Home; son, Dennis West of Alaska; older brother, Norris West of Idaho Falls, Idaho; his “other” brother, Philo; grandchildren, Marshall, Laurel, Soriah, Stewart, and Moira Curtis of Battle Creek, Michigan; and many nieces and nephews.

He was preceded in death by: his dad and mom, Lewis and Edith West; and his oldest brother, Harold.

Bruce’s memorial service will be held at the Sweet Home High School Track at 6:00 p.m., Thursday, May 26th, rain or shine. Reception will follow at the Boys and Girls Club.

In lieu of flowers, the family requests donations be made in his memory to Sweet Home Aquatic District Fund, P.O. Box 593, Sweet Home, Oregon 97386.