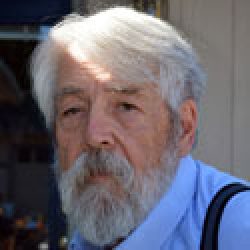 In lieu of flowers, the family requests donations in Brent’s name to the OHSU Knight Cancer Institute Fund, the OHSU Foundation, or the Samaritan Evergreen Hospice House.

Brent Penland Olsen, 72, died gently in his sleep surrounded by family after a brief illness. He was born October 14, 1941 in Berkeley, California to Harold Christopher Olsen and Mary Elizabeth (Penland) Olsen. Brent had a younger sister, Sara Jane Olsen.

Brent had fond memories of his childhood in Berkeley, including climbing trees, skinning his knees, and forgetting to tell his mom about the frogs in his jeans pockets before she found them in the laundry.

Brent’s family moved from Berkeley to Corvallis, Oregon when Brent was five years old. He attended Harding Elementary and Corvallis High School. He met his future wife, Shirley Kroll, during their junior year, and they both attended college at University of Washington. Brent joined the Sigma Chi fraternity and continued to court Shirley, a member of the Alpha Xi Delta sorority. During college, Brent and Shirley became lifelong friends with Jim and Michelle Wiek, and Jim was best man at Brent and Shirley’s wedding June 11, 1962. Brent graduated from University of Washington with a degree in accounting and began his career as a CPA with Arthur, Young, & Company in Seattle in 1963.

Brent and Shirley purchased a modest home on Perkins Lane in the Magnolia district of West Seattle. Brent worked with Shirley’s father, Jack, to construct an addition to the home, and that began Brent and Shirley’s lifelong passion for home improvements. Shirley designed the projects, and Brent would do the carpentry, electrical, and plumbing, often with the help of good friends.

Following the birth of their first daughter, Whitney, in 1965, Brent and Shirley returned to Corvallis, and Brent joined and later purchased his father Harold’s accounting firm, which became Olsen & Olsen, CPAs on the corner of 5th and Madison. Brent was active in various committees and nonprofits, including: Benton County Democratic Central Committee (chairman, 1968-69); Corvallis Area Chamber of Commerce (vice president and board member, 1973-76); Corvallis Arts Council (treasurer, 1968-69); Oregon State University President’s Club (since 1971); and treasurer for various other local, state and congressional political races.

Brent also served as a member of the AICPA Council, Accounting Theory Committee, Board of Examiners, and the National Association of State Boards of Accountancy. He was chairman of the Oregon State Board of Accountancy from 1984 to 1987, and a board member of the Oregon Society of Certified Public Accountants. He was also an instructor and guest lecturer at Oregon State University, University of Oregon, and Linn Benton Community College.

Brent and Shirley welcomed their second daughter, Meredith, in 1967, and their son, MacLane “Mac”, in 1971. All three children have fond memories of their dad’s good nature and humor. They used to give him funny books, like the Patrick McManus stories of fishing and childhood mischief, just to watch him laugh out loud. He’d always crack up watching the snake in Disney’s “Jungle Book” film. He taught his kids to be intelligent, work hard, make friends, respect elders, and give back to their communities. He was proud of their successes in life. Whitney is the marketing director for Mennonite Village. Meredith is a school teacher for the Medford School District. Mac owns and operates the Sweet Home Funeral Chapel.

Brent was an early adopter of every Apple product released, dating back to the first desktop computers in the 1970s. He proudly slapped an Apple logo sticker on his car and briefcase and prized his crusty Apple coffee mug. He used digital technology at work and to take, collect, and share photos of his family. In recent years, he enjoyed piecing together his family history and discovered he was a third-generation descendant of Gustav Olsen, who emigrated to the U.S. from Norway in the mid-1800s.

Brent’s happiest times were spent with Shirley at their 40-acre property along Belden Creek, where they brought life back to an old log cabin and fishing pond. He loved being a grandpa to Ole, Phoebe, Sarah, Emma, Max, and Olivia, and attended their soccer games, school plays, concerts, track meets, Taekwondo and Karate competitions, and other activities. The family spent many weekends at the pond fly fishing, catching (and releasing) butterflies and Newts, and paddle-boating. Brent looked forward to mowing the meadows with his tractor after work.

Brent and Shirley enjoyed entertaining and hosted many wonderful parties and picnics throughout their 52-year marriage. They made friends easily and will be remembered for their Christmas parties and gourmet dinners. They were partners in the truest sense of the word; living, loving, and working together.

Brent was preceded in death by his parents, Harold “Ole” and Mary “Marie” Olsen, and his sister, Sara “Sali” Olsen.

In lieu of flowers, the family requests donations in Brent’s name to the OHSU Knight Cancer Institute Fund, the OHSU Foundation, or the Samaritan Evergreen Hospice House.