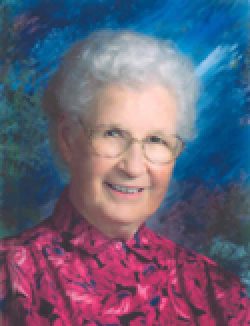 Viewing will be Thursday, August 14 from 3 – 6 p.m. at Sweet Home Funeral Chapel. A memorial service will be held at 1:30 p.m. on Friday, August 15 at Elm Street Baptist Church in Sweet Home. In lieu of flowers, donations may be made to Hospice.

Bonnie was born October 27, 1917 in Metzger, Oregon to John Fredrick and Minnie Jane (Evans) Baughman. She was the second child and the only girl of 8 children. Around 1920, the family moved back to Arkansas and lived there until 1936 when they returned to Oregon, settling in the Crabtree area. Bonnie worked on the family farm, harvested various crops in Washington, Oregon and California yearly, and helped raise her 4 younger brothers. In the late 1940’s, she worked at Blowout logging camp, near Detroit, Oregon, in the kitchen cooking for the many loggers. There she met her husband to be, Ralph Johnston.

On June 14, 1947 Bonnie and Ralph married. They continued to work at Blowout for a short time before moving to Salem. While in Salem, her first two sons, Keith and Kenneth were born. In 1951 they moved to Sweet Home where their third son, Larry was born. Bonnie’s dream house overlooking the Foster Reservoir was built by the family from 1962 through 1964. She lived there until moving into the Wiley Creek Community Assisted Living Facility in 2004.

Bonnie loved keeping busy. After her boys were pretty much on their own, she worked at the Porta Via Motel in Sweet Home. With a friend of hers, she started an upholstering business in her basement. This was very successful for many years. In her spare time she made soap, painted houses, became a talented artist, made hundreds of quilts most of which she donated to the Sweet Home Fire Department, and raised flower and vegetable gardens beyond compare.