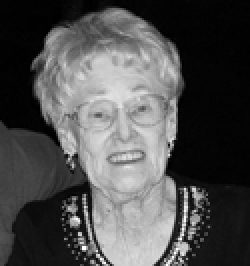 Memorial contributions can be made in Betty’s memory to the Roy Johnston Park fund at the Boys and Girls Club; 890 18th Avenue; Sweet Home, Oregon 97386.

Betty Ruth Watkins, 86, of Foster, Oregon passed into Eternity Sunday with her four beloved children by her side at Evergreen Samaritan Hospice in Albany after a courageous battle with cancer. She was born in Moxee, Washington to Fred and Ruby (Morrison) Emmerson.

She met the love of her life, Jerry Watkins, in Washington after World War II, and they were married May 24, 1946. The couple moved to Foster in 1948 where they raised their four children. Jerry passed away in August 1991.

Betty’s beautiful yard is a testament to her love of flower gardening and she tended her flowers until a week before her passing. She loved camping, fishing, traveling, and watching the Mariners or Trail Blazers play. Betty inspired all those who knew her as she battled cancer and continued her life’s adventures. She enjoyed hot air ballooning in Arizona, four wheeling in the desert, Mariner’s spring training, camping, and riding to her 85th birthday party on a Harley motorcycle with her grandson, Chuck.

Betty will always be remembered by her love and devotion to her family. Her treasured grandchildren counted on her to be the pitcher when they were ready for a a ball game and the past 40 years found her cheering them on at countless ball games and school events. When they came to Grandma’s, they found the best toys and Starbursts. She was an honored guest at their weddings and welcomed the new spouses with open arms. Betty never forgot a birthday and her family and friends could count on a birthday card coming to them in the mail.

She will lovingly be remembered by her siblings, Nona Gere, Dolly Kerr, Joyce (Harold) Albert, and Warren (Bud) Emmerson in Washington and her many cousins, nieces and nephews. Betty visited them often and those times were filled with laughter, shopping, cooking, and traveling.

Memorial contributions can be made in Betty’s memory to the Roy Johnston Park fund at the Boys and Girls Club; 890 18th Avenue; Sweet Home, Oregon 97386.