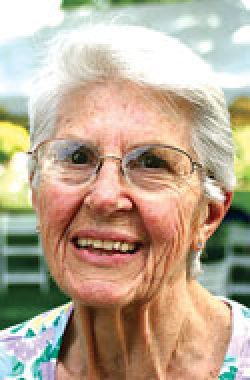 A small family memorial was held on Oct. 21, and a memorial service is planned for Nov. 15 in Lompoc, Calif.

In lieu of flowers, memorials may be made to Evergreen Hospice House in Albany or the charity of your choice.

She was born April 25, 1935 in Hart, Minn., to Etta (Heiden) and Arnold Sievers, the second-youngest of seven children. She grew up on her parents’ farm in south-eastern Minnesota, attending the local one-room schoolhouse until the eighth grade when she left school to help on the family farm. Later, at age 53, she returned to school to completed her GED degree after raising her children.

She married Wilton Klawiter on June 11, 1955 and they settled in Rushford, Minn., where they owned and operated an electronics repair shop.

In 1960, the Klawiters moved to Lompoc, Calif., where Mr. Klawiter worked at Vandenberg Air Force Base as an electronics engineer.

During that time, Mrs. Klawiter spent her time raising her two daughters, caring for a great-aunt, and making beautiful cakes for friends and family. She was active in her church, Bethany Lutheran in Lompoc, in Ladies Guild, Bible Study, Altar Guild, Vacation Bible School, and singing in the church choir. She also served as church secretary from 1975 to 1987.

At age 49, Mrs. Klawiter lost her husband of 28 years to cancer.

She worked in the medical field for many years following, before taking a job at Costco, and retiring in 2005.

She lived in Lompoc until recent years, when she began spending more and more time with her daughter’s family in Sweet Home due to declining health.

She was a faithful member of her church for 50-plus years and was also involved in Sweet Adelines for 20 years. She greatly enjoyed sewing and was an expert at baking bread and decorating cakes. She enjoyed spending time with her three granddaughters.

Mrs. Klawiter could best be described by the word “servant.” She enjoyed helping others in any capacity, and even in her declining years was always looking for ways to help with family projects and household tasks. She enjoyed children, chocolate, and milkshakes.

She was preceded in death by: her husband Wilton; sister Ethel; and brothers Norman and Charles.

A small family memorial was held on Oct. 21, and a memorial service is planned for Nov. 15 in Lompoc, Calif.

In lieu of flowers, memorials may be made to Evergreen Hospice House in Albany or the charity of your choice.