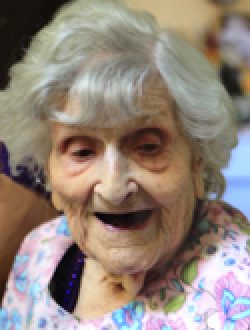 A private service will be held on Thursday, August 22, 2013 at Gilliland Cemetery in Sweet Home.

She married her first husband, Oren R. Linton, in February of 1929. Oren worked as an oilfield foreman for Shell Oil. Their daughter, Betty Mozelle Linton Vogel, was born in Oklahoma in 1935.

The couple later moved to Illinois, where their son, Dale Ray Linton, was born in January 1947. They then moved to Algiers, Louisiana. Oren passed away there in 1954.

In 1955, Bea brought her family to Southern California. For the first time in her life, she worked full time to support the three of them. She worked primarily as a psychiatric nurse at the Patton State Hospital in San Bernardino. She lived in Redlands, California where she met her second husband, Verral Copeland. They married in April of 1975.

In 1978, the Copelands retired and moved to Sweet Home, Oregon, where her daughter Betty’s family lived. They traveled across the U.S., Canada, and Mexico in their RV. Verral passed in 1982.

Bea had many friends in Sweet Home and was very active at the Senior Center. She enjoyed cooking, gardening, canning, and fishing. She hosted card games with her closest friends for many years.

A private service will be held on Thursday, August 22, 2013 at Gilliland Cemetery in Sweet Home.