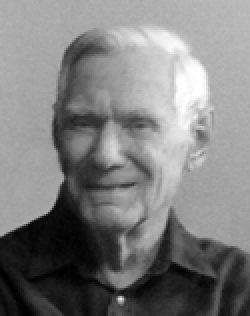 A memorial service will take place at 2:00 p.m., Saturday, March 15, 2014 at Sweet Home Evangelical Church; 1347 Long Street, Sweet Home, Oregon 97386. Memorial contributions can be made in Arend’s name to a veteran’s charity of your choice.

Arend J. Franken, 88, of Sweet Home, Oregon passed away Monday, February 24, 2014. He was born the eighth of nine siblings on a farm in Town, Ohio in Upstate New York to immigrant parents, Gerhard and Edith (Etherton) Franken.

After high school graduation, Arend was inducted into the army and served from 1944 to 1946 in France as a Tech 5 Sergeant transporting troops and equipment during WWII. Because of his pride as a veteran, he spent many of his later years involved with the Veterans of Foreign Wars (VFW).

Upon returning from the war, Arend settled down in Southern California, attended Whittier College, earned a bachelor’s degree, and met and married Betty Dayhuff. They had their first child and bought their first home on the GI Bill in Hawthorne, California.

Over the years, Arend worked as a materials engineer for several aerospace companies, including: Martin Aircraft in Colorado; Boeing in Washington; and Hughes Aircraft in Southern California. While at Hughes, the Frankens lived in Costa Mesa, California from 1967 to 1988. Arend studied at Western University and earned a J.D. Law degree.

In the early days, Arend loved to take the family camping, go on rock hounding trips, and enjoyed backyard BBQs while sitting with his kids, watching an afternoon lightning and thunder storm over the Rockies. He hunted and fished, played card games with friends, and read many books.

In 1968, Arend became a Christian while attending Church of the Crossroads. Later, he taught Bible studies and occasionally preached at Mapleton Evangelical Church. In the 80’s Arend and Betty bought property in Mapleton, Oregon to enjoy country life, and they retired there in 1990.

Along with his involvement in VFW and Mapleton Evangelical Church, Arend volunteered for Start Making A Reader Today (SMART), and was on the board for the Mapleton Volunteer Fire Department and Brickerville Cable Company.

In 2006, Arend and Betty moved to Sweet Home to be closer to family, and Arend joined the Evangelical Church, the VFW, and volunteered with the ladies auxiliary to help with bingo at Twin Oaks Rehab and made many good friends.

The family thanks all the people who went to visit him these past few months. It really brightened his last days. He was loved and will be missed by many.

Arend is survived by: his wife, Betty; his three daughters, Sharon Henderson of Milwaukie, OR, Shirley Franken of Lakewood, CO, and Sally Hefty of Sweet Home, OR; five grandchildren; one great-grandchild; his brother, Bernard Franken; and his sister, Alice Freund.

A memorial service will take place at 2:00 p.m., Saturday, March 15, 2014 at Sweet Home Evangelical Church; 1347 Long Street, Sweet Home, Oregon 97386. Memorial contributions can be made in Arend’s name to a veteran’s charity of your choice.