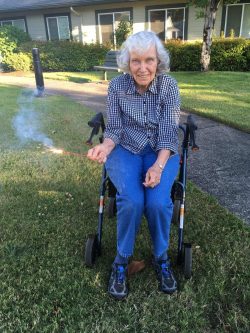 She will be buried in the Willamette National Cemetery in Portland with her husband Gordon.

Anna Jane Hensley, 93, of Salem passed away Tuesday, two weeks past her 93rd birthday. She was born in Tulsa, Oklahoma to Otto Leo and Verta L. (Strasbaugh) Iverson.

She married Gordon Hensley on April 22, 1954 while living in Oklahoma on her parents property near Tulsa. She had two sons, David in 1955 and Monte in 1957.

The family moved to Grants Pass in 1963 where she worked as the school secretary for New Hope Christian School. Then in the summer of 1969 moved with her family to Salem to be the secretary at Salem Academy. After her sons graduated High School she went to work for the State of Oregon Department for Transportation as an accountant, where she retired.

After retirement she spent time helping raise her grandson David. Then when her husband Gordon fell and broke his hip, she cared for him until his death in April of 2012.

Jane loved sewing and made several nice quilts for family members and friends. She also loved sewing with her friends from church.

Four years after her husbands passing she had developed dementia to the degree of not being able to live alone. She moved to an assisted living location in Sublimity for five years, then needed more care and was relocated to Battle Creek Memory Care. She had a long time friend, Carolyn Carl come visit her at her memory care facility on a weekly bases, along with other family members over the past year. She will be greatly missed by her family and friends, but we know she is with the Lord in heaven and we will see her again.

Jane is survived by her sons: Dave and Monte; daughter-in-law Roberta; grandson David; and 12 nieces and nephews.

She will be buried in the Willamette National Cemetery in Portland with her husband Gordon.
Sweet Home Funeral Chapel is handling arrangements. www.sweethomefuneral.com