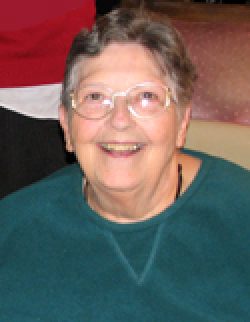 Allie Margaret White was born in Hoxie, Kansas to Everett and Mildred Baxter. She lived in Missouri during her childhood then moved with her family to the Lebanon area during her teenage years.

They have four married daughters: Dana (and Les) Stone; Mona (and Rick) Gordon; Kari (and Tom) Brown; Nyla (and Craig) Rawie. All live in Oregon.

Margaret loved to create things. She loved to sew and would make clothing for herself and her daughters. She helped design weddings for all four daughters and made the dresses that were needed for these events. She loved cooking and baking and was constantly clipping and trying new recipes.

Margaret had a lifelong love of books. During her later years she spent many hours enjoying whatever book she could get her hands on.

She was preceded in death by her parents and all three of her siblings.

Donations/Contributions can be made to the Alzheimer’s Association: www.alz.org.