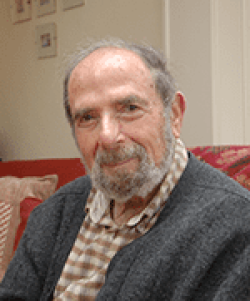 A farewell gathering is planned for the end of March. For those who would like to make a contribution in Alex’s memory, we suggest the Beit Am building fund or the OHSU Parkinson’s Center.

Alex Fischler liked to get up at 5 a.m. to pick the raspberries before the birds could get to them. He was a masterful gardener, a classical music appreciator, an enthusiastic host and private tour-guide, a great friend, and the head of a loving household. He died February 28 at his home in Corvallis.

Alex was born near the German border of Czechoslovakia to Hermann and Sabine (Estlein) Fischler. He survived the Holocaust through a turbulent childhood in Europe, spending most of the war in southern France, then escaping via Spain to Palestine, where he experienced the birth of Israel. After two years at Hebrew University in Jerusalem, Alex earned a scholarship to attend the University of Washington, where he earned his PhD in Comparative Literature. His memoir, Tell the Tale, documents this part of his life.

After teaching stints at Whitman College and the University of Oregon, Alex spent most of his career at the State University of New York at Binghamton, where he was a professor of Comparative Literature for 30 years. His numerous scholarly articles on 19th and 20th century French and English literature appeared in prestigious academic journals.

After he retired to Corvallis, Alex’s love of languages, culture and learning only expanded. He and his wife, Carol, traveled widely, and made friends everywhere they went. There were frequent international visitors to their home, including bus drivers and tour guides whom Alex would keep in touch with for decades after their initial brief meetings.

Alex spoke four languages fluently, and was dedicated to learning Italian in the last decade of his life. He enjoyed the communities of the French Conversation Group, the Literary Salon, the Italian Conversation Group, and his Fitness Over Fifty exercise pals. He could spend hours translating poetry, but he was also an all-around handyman, rebuilding three houses and throwing himself into any project or chore presented to him.

Throughout his long battle with Parkinson’s Disease, Alex never stopped smiling and affirming his gratitude, saying that the presence of his family was the best medicine he could have. He died with his wife and three children right by his side, just as he wanted.

He is survived by his wife, Carol; his brother, Yakov, in Israel; his three children, Maia Fischler (Mark Yeager), Nurit Fischler, and Adam Fischler (Annie Knepler); and his grandchildren, Amelia Yeager, Liza Yeager and Pearl Fischler.

A farewell gathering is planned for the end of March. For those who would like to make a contribution in Alex’s memory, we suggest the Beit Am building fund or the OHSU Parkinson’s Center.