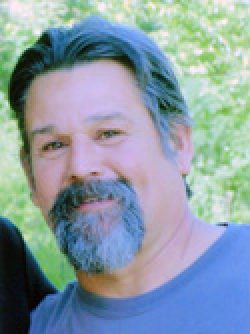 Robert Mitchell Perkins, 52, of Sweet Home passed away Friday. He was born in Modesto, California to Jon and Carolina (Smith) Martin. He was the oldest of four boys and he helped take care of the family from a young age.

At the age of 16, he met and married Susan Cahoon and raised their children. He loved and provided for his family. They lived in many places throughout the United States and Haiti. He also worked and traveled in Africa. He was an accomplished guitar and harmonica player. He spent many hours playing music with his family and friends.

He moved to Sweet Home in 2006 where he met and lived with Joy and her family, Grandpa Bob, Carson, and Colleen Strasser.

Robert had an adventurous spirit. He loved motorcycles, especially Harley Davidsons. He traveled many miles on his Harley and formed many friendships along the way.

He was preceded in death by his wife, Susan Cahoon Perkins, and brother, Curtis Rocha.