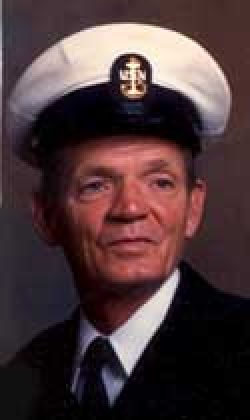 Paul enlisted into the US Navy May 26, 1943, and then retired in 1972 as a Chief Petty Officer. He served in World War II, Korea, and Vietnam. He served as a Chief Engineman Mechanic and received the Good Conduct Seventh Award and the Navy Achievement Medal.

He was raised in Sioux City, Iowa until he was 17 years old. He lived in several different states throughout his Naval career until retiring in San Diego. He moved to Lapine, Oregon in 1982, and finally to Sweet Home in 2005.

Paul worked for 10 years as a Boiler Mechanic for San Diego Gas and Electric. He was a member of American Legion Post 45 in LaPine, Oregon.

He was a loving and caring husband, father and friend. He loved the Navy, ocean, nature, watching God’s creations, and traveling the world. He was a good neighbor and always had a kind word for everyone he met.

He was preceded in death by daughter, Mary M. LaBlue, who passed away in 2008, and sister, Evelyn Foote.

“May the Good Lord be with you.”