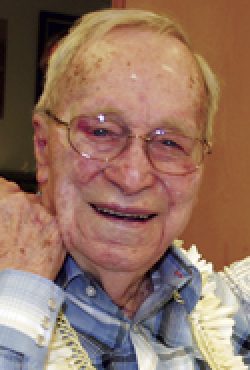 George Wilber McBride, age 101, of Sweet Home passed away Saturday. He was born in Sterling, Colorado to William Morris and Hilda (Elsass) McBride.

In 1928, he and his younger brother, Gene, rode box cars to California where George got into construction work. He made a career of operating heavy equipment in the construction of dams and roads in California and Oregon. He worked on the Folsom, Boulder, Shasta, and Culver Dams. He also worked on Interstate 5 in Oregon. He settled in Marysville, California, retiring at age 65. George moved to Sweet Home in 2001 to live with his daughter.

George was very proud of his association with the Operating Engineers Local 3 up until his death. George joined the Church of Jesus Christ of Latter-day Saints around 1962 and remained a member after his move to Sweet Home.

George owned many original model cars, buying his first car at age 16, and loved to tinker with them. He loved to travel throughout the country having been coast to coast and border to border leaving lasting friends wherever he traveled. He loved to make wooden whirly-gigs and other objects which he gave to all of his friends. Most of all, George was a great story teller filling each tale with great laughter and love.