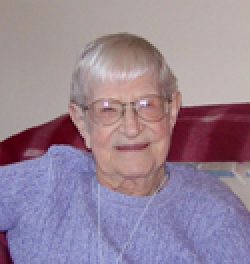 Fern was born April 14, 1923 in Bordulac, North Dakota. She was the daughter of Matthew and Helene (Haase) Wentland.

Fern graduated from high school in Bordulac, North Dakota in 1940. She went to beauty school and worked in a beauty shop in Carrington, North Dakota until 1945.

Fern and her sisters, Rosamond and Daisy, moved with their mother and father to Long Beach, California in 1945. Fern worked for the Bank of America in Long Beach until 1950, and then she transferred to the Ontario Branch.

In Ontario, she met Harold Don Wernicke, and they married in 1958. Fern had two children, twins, Dale and Carol, in November 1958. The family resided in Ontario, California for two years before moving to Montclair, California where the family stayed until 1972.

In 1972, Harold retired and the family moved to Sweet Home, Oregon. Fern and Harold lived in Sweet Home on Wiley Creek Road where they had 11 acres of land that they converted into a tree farm. They moved into the town of Sweet Home on Sunset Lane in 1989.

Harold died from cancer in February 1994. Fern spent the next 15 years lovingly caring for the home on Sunset Lane. Fern spent her last year at Wiley Creek Assisted Living community rejoining old friends and making many new friends during her brief stay.

Fern was a member of Sweet Home Christian Church on 18th and Long Street where she participated in many activities over the years. She was an avid bowler and belonged to leagues in both Sweet Home and Lebanon. She enjoyed playing Pinochle, knitting, and crocheting. Fern also loved hiking and camping in the outdoors.

Fern’s last year was difficult as she lost her older sister Rosamond, in December 2009. Her younger sister, Daisy, had a major stroke in March 2010 and died in December that year of complications from Myasthenia Gravis. Fern battled Rheumatoid Arthritis for many years. Although the pain from RA was excruciating at times, she always kept a bright, upbeat spirit about her. Her favorite doctor was her Rheumatologist, Dr. Cody Wasner of Eugene, Oregon, who aided her for over 30 years.