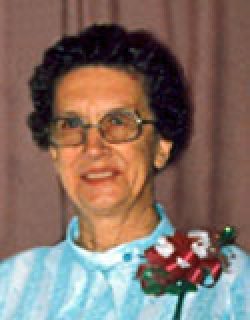 Edith married Amos Jackson Crockett in Vancouver, Washington in March of 1941. They lived in Sweet Home until 1970 when they moved to Eugene. She moved to Veneta in 1986, and then back to Sweet Home in 2000. In 2007, she moved to Bend, and from there, moved to LaPine in August of this year.

She belonged to the American Legion Auxillary. She worked seasonally for four years at the Salem Cannery. She was a homemaker and cared for Amos after his accident in 1965. She enjoyed spending time fishing, hunting, camping, and growing vegetables, flowers, and roses. She enjoyed knitting when she had the time.

Edith is survived by her son, Jack A. Crockett of LaPine; daughter, Evelyn Fagan, of Sweet Home; brother, Daryl Nothiger, of Sweet Home; sisters, Mardel Hufford, of Sweet Home, Byrdene Brown, of Harrisburg, Janet and husband, Fred VanRonk, of Vancouver, Washington; seven grandchildren; and 16 great grandchildren. She was preceded in death by her husband, Amos, in 1985.