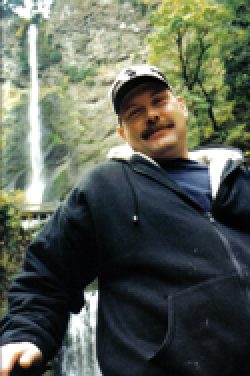 David Christian Barrett, 43, of Sweet Home passed away Saturday at his home. He was born in Chula Vista, California to David L. and Janet E. (Clay) Barrett.

David grew up and graduated (1987) from El Capitan High School in Lakeside, California where he played varsity football and won the heart of his soulmate and wife, Laura. They married August 18, 1990. As a child, David sometimes spent summers with his grandparents in Sweet Home. In 2000, David and Laura moved to Sweet Home from Longview, Washington to care for David’s grandmother until her passing in 2003.

David worked for Wah Chang in Albany. He loved to vacation on the Oregon coast and walk the beaches looking for seashells or agates and searching the sands with his metal detector. He enjoyed fishing for steelhead at Deadline Hole, and he loved his dogs.

David is survived by: his wife, Laura; parents, David and Janet; mother-in-law, Cynthia Hodges of California; father-in-law, Allen Forrest of Orlando, Florida; sister, Shannon Pinkerton and her husband Troy; grandfather, J.T. Clay of Chula Vista, California; niece, Jordan Pinkerton-Glause and her husband Kody; nephews, Troy Pinkerton, Haley Pinkerton, Justin Pinkerton, and Cody Pinkerton; and numerous aunts, uncles, and extended family, all of whom will greatly miss the smiles, laughter, and love David gave. He was preceded in death by his grandparents.