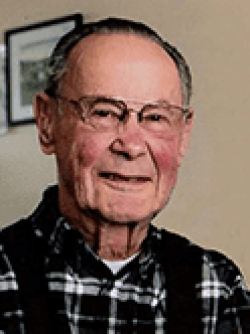 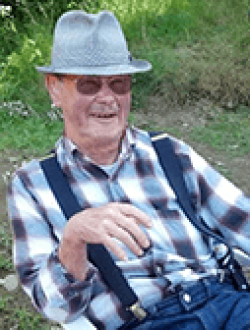 Arnold Victor Weld, 88, of Albany, formerly of Sweet Home, passed away after a long battle with Alzheimer’s. Arnold passed away due to multiple organ failure at Mennonite Village Lydia’s House located in Albany, Oregon.

He was born in Hurdsfield, ND to Rollan and Alta Weld and completed their family of six children. He grew up and attended school in Bowden, ND through the eighth grade. The entire school consisted of one room with ten students and his father as the teacher. They moved to LaGrande, OR in 1946, where Arnold had the cultural shock of attending a school of 600 students. Arnold and his folks then moved to Malone, WA, where he graduated from Elma High school in 1950.

After working various jobs in the Malone area, he enlisted in the Air Force. He served four years at McCord Air Force Base in Washington State. He discharged in December 1956 as Airman First Class.

Upon discharge, he moved to Sweet Home, OR to live with his brother, Lester, and Lester’s wife, Faye. Arnold worked for Lester at Sweet Home Sanitation and planted trees for the US Forest Service before getting a job at Santiam Lumber. He worked two years at Santiam Lumber, was laid off, and immediately got a job at the Plywood Mill in Sweet Home.

In 1957, Arnold married Leola Henthorne and had three children. His sister-in-law, Drew (Henthorne) Baldwin, lived with them for seven years while she attended middle and high school. Drew has often said, “They gave me a childhood.”

After working 35 years at the mill, Arnold retired and enjoyed traveling to Mexico, Canada, England, France, Italy, Switzerland, and Panama, and spending winters in Arizona.

In 1998, Arnold and Leola moved to Albany, OR to be closer to grandchildren. He enjoyed home improvement projects, crafting walking sticks, building bird houses, camping, and reading.

He is also survived by all the wonderful caregivers at Lydia’s House and staff at Mennonite Village who loved and cared for him as if he was their own family member.