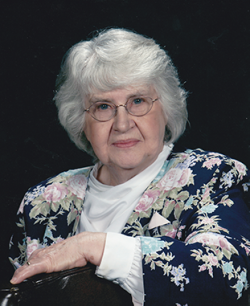 A memorial service will be at 1:30 p.m., on Saturday, May 11, at Providence Vineyard Christian Fellowship in Scio, Oregon.

Alice Rebecca Yoder, 92, of Sweet Home, Oregon passed Sunday, April 7, 2019 in Lebanon. She was born August 24, 1926 in Denbigh, Virginia to Asa and Rebecca (Shenk) Hertzler. Her childhood years were spent in Virginia and Florida. At age eleven, she made a public commitment to Christ and was baptized. In 1945, she graduated from Eastern Mennonite School in Virginia.

She married Robert H. Yoder on December 19, 1948. She was a homemaker and mother of five children. She served alongside her husband, who was a pastor in various small churches. They had many adventures while living in six different states: Oregon, Virginia, New Mexico, Kansas, Mississippi, and California. They settled back in Oregon in 1975.

Alice delighted in flowers and poetry and music, especially in the family singing together. She published a book of her poems entitled, “Loveliest to Me.” She befriended the children of the neighborhood, and was as a strong woman that twice survived cancer.

She was preceded in death by her husband in 2004.

A memorial service will be at 1:30 p.m., on Saturday, May 11, at Providence Vineyard Christian Fellowship in Scio, Oregon.